In 2018, South Australia’s sustained support for renewable energy has reached widespread attention both nationally and globally, largely in part to the Hornsdale power reserve. Thanks to its partnership with Tesla to provide the world’s largest lithium-ion battery, it’s been credited with stabilising the state’s power grid after several years of less than perfect performance. However, there’s an alternate battery technology being promoted by a prominent South Australian, offering several key benefits compared to lithium-ion. 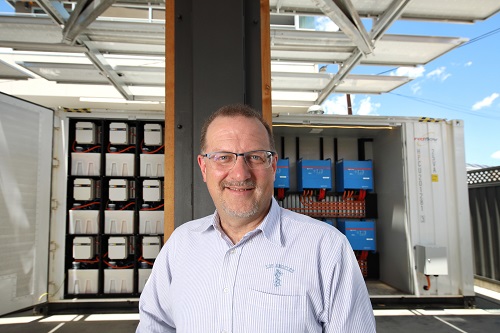 “Simon Hackett with LSB reference platform at Base64 #7”

Redflow is a Brisbane-based company who just happens to have Simon Hackett as one of the key backers. As the founder behind ISP Internode, former NBN board member and the owner of the first Tesla Roadster and Tesla Model S electric vehicles in Australia, Mr Hackett has built an enviable reputation as one of Australia’s most accurate weathervanes when it comes to emerging technologies. Mr Hackett was the CEO of Redflow until September 2017, but is still its largest single investor, as well as a non-executive director and technology evangelist for the company.

Redflow specialises in zinc-bromine flow batteries, and currently sells two different versions, the ZCell for residential use and the ZBM2 for industrial and commercial applications. It’s not the only company in the world to make batteries based on this technology, but its real breakthrough has been in miniaturising the size of these units. We recently interviewed Mr Hackett after a keynote he presented at the Australian Energy Storage Conference, to understand why he’s become such an energetic proponent of this new battery technology.

In the past, zinc-bromine flow batteries were around the size of shipping containers, but Redflow has managed to shrink them to the size of a small bar fridge, making them perfect for home use. The ZCell battery has a capacity of 10 kWh, with no loss in storage capacity for a decade, no matter how many times it is charged and discharged, a huge advantage over traditional lithium-ion batteries. When we asked how Redflow managed to achieve this miniaturisation, Mr Hackett explained that this was the primary task the founders set out to achieve. “The electrode stack they designed embeds a complex set of electrolyte fluid flow handling into moulded plastic structures built right into the edges of the same plates on which the electrochemical reactions occur. Those plates are then sandwiched together and sealed so all the complex fluid flow ‘plumbing’ that is ‘external’ (and vulnerable) on conventional (big) flow batteries is internalised – and invulnerable – in ours.” 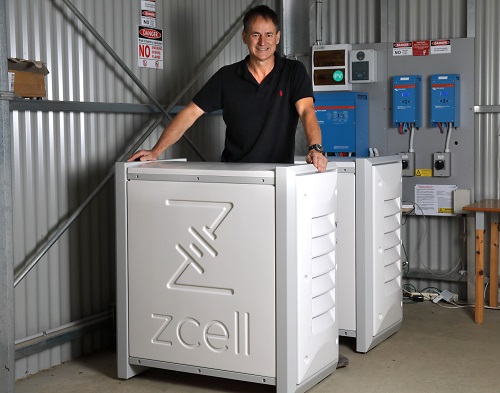 Alan Noble with his ZCell batteries at his property at Willunga, south of Adelaide

They’re able to maintain their long-term life by flushing the zinc off the plates and returning it to the zinc bromide solution every three to four days. There’s a drawback to this in that each battery must do a full discharge every four days of active use, with a two-hour maintenance schedule each time. As a result, a single battery is not able to deliver 100% of its stored energy 100% of the time, but this is easy to get around according to Mr Hackett. “With more than one battery, this becomes invisible as our BMS sequences the operation of batteries so they take turns to do this; With applications to which we are best suited, those being ‘daily deep discharge’ applications, it’s a non-issue.” The battery can also be put into ‘Standby Power System’ mode for long-term standby retention of charge (with no self-discharge at all). In this mode it acts more like a standby generator, with a restart time back to active operation of around 30 to 60 seconds. The company is developing a hybrid solution that builds in an ultracapacitor to cover that standby-startup time and create an ultra-long life online UPS battery (this being the one application area for which the battery is not – yet – well suited).

Due to the fact they’re built around a liquid-based solution that requires moving parts, zinc-bromine flow batteries aren’t suited to smaller applications such as phones or laptops. According to Mr Hackett, this is “…not the target application set for us and we don’t intend to create a smaller unit than we already make. This is about the lower limit for an energy efficient super-small flow battery. Making it smaller would magnify the fixed overheads in terms of expense for necessary flow battery system components and would also magnify the relative impact on round-trip efficiency of the necessary energy draw to drive the pumps and control systems.” 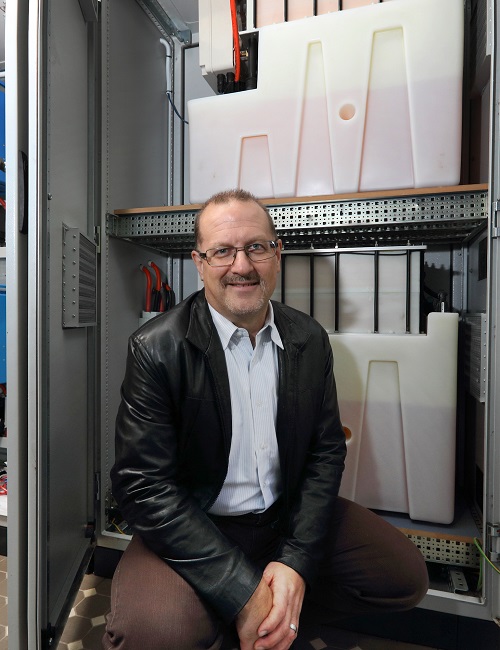 While ZCell batteries are well suited for home use, they can also be clustered to create vast storage facilities. “Making a small one is no barrier to wiring lots of them together. Tesla proved that (in spades) with 18650 Lithium-Ion cells – thousands of which are in the floor of my Tesla Model S.” This makes the batteries perfect for large scale deployments, without the decreasing lifespan of lithium-ion batteries over time, the latter of which has a typical lifespan of between 300 to 500 full discharge cycles. This can mean a lifetime of only two to three years if the battery is daily-deep-cycled. However, the Tesla batteries in use at the Hornsdale facility come with a 15-year warranty, as they’re mainly used for grid frequency and voltage stabilisation and for supporting the grid in the critical seconds after a coal-fired power station fails without warning. These are applications in which the battery energy is delivered at super high power, but for very short periods (ten minutes at the most) each time the battery is called upon to support the grid in this way. In contrast, zinc-bromine flow batteries can be used continually to deliver long time-base, long-term, daily energy storage and delivery while still maintaining their lengthy lifespan. Hackett frames this as being the difference between a Sprinter and a Marathon runner. He believes the future grid will benefit from the presence of both storage types because both application requirements exist in the grid.

Other key benefits to these batteries include higher recyclability of the battery components and electrolyte, a flat energy curve which delivers 100% of the capacity with constant power, and they’re also less prone to thermal runaway, requiring no active cooling.

There is a cost to zinc-bromine technology though, literally. The initial cost of acquisition is higher than lithium-ion, but Hackett believes “…that the technical benefits of flow batteries make that higher up-front cost worthwhile – that there is a beneficial overall total cost of ownership here. This is quite like electric cars – they cost more to buy, they cost less overall to run than conventional (and cheaper) cars.”

While the company initially had some hiccups with its first mass-production run, the company has since relocated its manufacturing from Mexico to a new Redflow-owned facility in Thailand.   Redflow has for several months made battery stacks – the most complex part of its battery – at this new plant, with complete battery production scheduled for this month (June 2018). This production is enabling Redflow to deliver backordered batteries to customers already and to accept new product orders. Redflow sells its products to energy system integrators around the world. As the world moves towards renewable energy sources, the requirement for battery backups is becoming obvious, and the benefits of zinc-bromine batteries deliver both long-term sustainability and an overall less environmentally impacting product.