Group-IB supported an INTERPOL-led operation Falcon targeting business email compromise (BEC) cybercrime gang from Nigeria, dubbed TMT by Group-IB. A cross-border anti-cybercrime effort that involved INTERPOL’s Cybercrime Directorate, Nigerian Police Force, and Group-IB’s APAC Cyber Investigations Team has resulted in the arrest of three individuals in Lagos. Since at least 2017, the prolific gang compromised at least 500,000 government and private sector companies in more than 150 countries. The investigation continues as some of the gang members remain at large.

Business Email Compromise (BEC) is a type of email phishing attack that relies on social engineering. As part of BEC, phishing emails can target particular people within an organization or sent out en masse. Often disguised as money transfer requests, HR-communications or business proposals they aim to steal confidential data.

The three BEC gang members with the initials “OC” (32 y.o.), “IO” (34 y.o.), and “OI” (35 y.o.), identified with the help of Group-IB Cyber Investigations and CERT-GIB teams, have been arrested in Lagos not long ago by Nigerian cybercrime police unit as part of the Falcon operation. The data discovered on the devices of the arrested TMT members has confirmed their involvement in the criminal scheme and identified stolen data from at least 50,000 targeted victims, according to Nigerian Police. 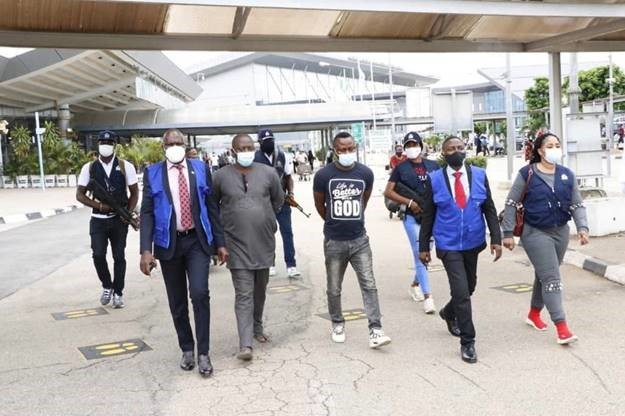 Group-IB has been tracking the gang since 2019 and established that around 500,000 government and private sector companies could have been compromised by TMT gang members. Based on the infrastructure that the attackers use and their techniques, Group-IB was also able to establish that the gang is divided into subgroups with a number of individuals still at large. The findings on other suspected gang members, whom Group-IB was able to track down, have been shared with INTERPOL’s Cybercrime Directorate. The investigation continues.

The analysis of their operations revealed that the gang focuses on mass email phishing campaigns distributing popular malware strains under the guise of purchasing orders, product inquiries, and even COVID-19 aid impersonating legitimate companies.

The attackers use Gammadyne Mailer and Turbo-Mailer to send out phishing emails. MailChimp is used to track whether a recipient victim has opened the message. 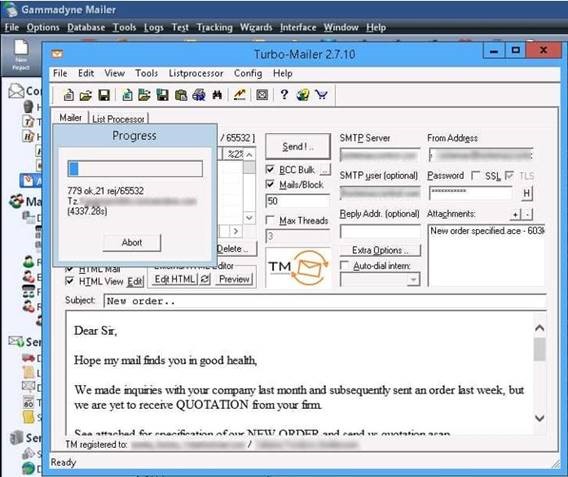 The gang was also seen using earlier compromised email account to push a new round of phishing attempts. The discovered email samples, detected and analyzed by Group-IB Threat Hunting Framework, were crafted in English, Russian, Spanish, and other languages depending on the scammers’ target list.

“Fig. 4 The example of the compromised data from the cybercriminals’ logs”

The goal of their attacks is to steal authentication data from browsers, email, and FTP clients. Over the course of their operations, the gang managed to infect organizations around the world, including in the US, the UK, Singapore, Japan, and even back home in Nigeria, according to Group-IB data. While the monetization methods of this gang are still being investigated, it’s not uncommon for cybercriminals to sell account access as well as sensitive data extracted form emails could to the highest bidder in the underground markets.

Craig Jones, INTERPOL’s Cybercrime Director highlighted the outstanding cooperation between all those involved in the investigation and underlined the importance of public-private relationships in disrupting virtual crimes. “This group was running a well-established criminal business model. From infiltration to cashing in, they used a multitude of tools and techniques to generate maximum profits. We look forward to seeing additional results from this operation,” he said.

“This cross-border operation once again demonstrated that only effective collaboration between private sector cybersecurity companies and international law enforcement can bring evildoers to justice,” comments Vesta Matveeva, head of cyber investigations team at Group-IB APAC. “It allows to overcome regulatory differences across countries that impede threat intelligence data exchange. While further investigation is underway, we are proud of what we’ve been able to achieve thanks to coordinated efforts by INTERPOL with the support of Nigerian cyber police.”