Against a global backdrop, holograms are finding new commercial outlets as effective weapons in the battle against counterfeiting and anti-tampering, offering product authentication benefits to governments and those responsible for law enforcement.

However, the technology’s capacity to re-invent itself, driven on through innovation and imaginative thinking, is enabling commercial holography to spread its international appeal and capacity to open-up new avenues of opportunity in places like India, where it’s finding a new role stuck on the windscreens of the country’s millions of vehicles. 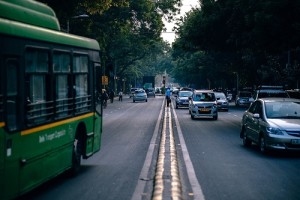 “An anti-polluting initiative in Asia benefits from holography, says the IHMA”

The Indian Ministry of Road Transport and Highways (MoRTH) has looked to the flexibility of holograms in a new move to tackle the issue of vehicle fuel pollution – in dozens of states across the country, people are being urged to ensure that they comply with a Supreme Court directive to use colour-coded hologram stickers to identify the type of fuel used in their vehicles.

The initiative started in 2018 when the court instructed the Indian government to start issuing colour-coded holograms/stickers to all vehicles to restrict the movement of vehicles, preventing them from emitting choking fumes in areas that had already been deemed heavily polluted, either on a temporary or a permanent basis. The programme, which started in Delhi-NCR in October 2018, is currently being roll-out across all states.

The directive sees diesel vehicles bearing a hologram sticker with an orange-coloured background, while cars running on petrol and compressed natural gas (CNG) will use another sticker with a light blue background. For all other vehicle, the background will be grey.

The hologram sticker, which includes the registration number, the registering authority, a laser branded PIN, and engine and chassis numbers, is essentially acts as a third registration plate attached to the inside of the bottom-left side of the windshield.

The capacity for holography to incorporate various data forms and recognition information continues to grow in importance but for now; it’s clear the versatility of the technology demonstrates a canny knack to add value as it seeks out an ever-expanding range of applications. With further advancements coupled with creative thinking, there’s no reason why the technology shouldn’t be able to secure other ways to help governments and authorities tackle whole raft of environmental issues.

*Credit to Holography News for the above information