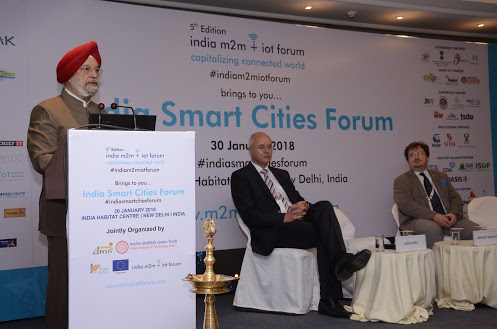 The inaugural session on ‘smart cities journey so far’, witnessed the Honourable Minister of Housing and Urban Affairs (MoHUA) Mr Hardeep Puri addressing the audience comprising of distinct stakeholders from the ecosystem. ‘Smart Cities Mission is setting a new benchmark in terms of project implementation. This remains one of the fastest ever project implementations at this scale and geographic spread in urban sector’, shared Mr Hardeep Singh Puri during his inaugural address to the audience.

Dr Sameer Sharma, Additional Secretary during his plenary address re-emphasized the significance of machine-to-machine (m2m) and internet of things (iot) technologies in smart cities, ‘M2M and IOT holds considerable promise and potential for Smart Cities in India and the World to improve lives of the people through enhancing existing capabilities manifold and opening vistas of development.’

The forum, also hosted the most significant ‘India-EU dialogue on ICT for Smart Cities’, moderated by the European Union, focusing on innovations, concrete cooperation experiences, and business partnership opportunities in the space of ICT for Smart Cities. ‘India and the EU share similar challenges and need similar solutions to ensure smart and sustainable urbanisation. The EU is impressed by India’s ambitious urban and digital agenda and committed to implement the Urbanisation Partnership. The EU can bring together its 28 Member States, all of which have their own key strengths, competencies and technologies. Our Partnership will bring on board the relevant stakeholders to facilitate policy dialogue and provide best practices, business solutions and joint research & innovation, and to look at financing models’, shared H.E. Mr Tomasz Kozlowski, Honourable Ambassador of European Union to India.

The Smart Cities CEO’s + Industry Round Table invited representation from Smart City Projects that have very successfully kicked-off and are delivering from the front, including the Industry Partners and Players who are making the most ambitious project of the Government of India’s Smart Cities vision a success. Companies and organizations including European Union, FIWARE Foundation, Telular Corporation, SEAK Energetics, C-DOT, GAIA Smart Cities, Dolphin RFID, Osiris Smart Connected Systems, Parking Rhino and Smart Cities Lab, demonstrated m2m and iot solutions for smart cities, with case studies that showcased successful implementations of these technologies.

The discussion points and deliberations from the sessions were reported and will be delivered to the decision and policy makers of the Government of India.