A global leader in security entrance systems for public and private facilities says Australasia and the Asia-Pacific might well take note of and prepare for the arrival here of trends towards increasingly violent and disruptive incidents already evident in Europe and the USA. 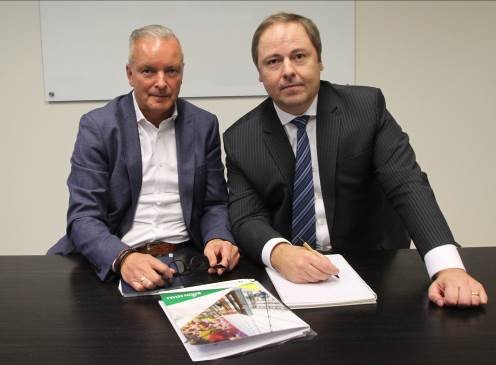 “My experience on this visit to Australasia and SE Asia is that there are some pools of excellence in security preparedness – airports, for example. But some corporate entities, in particular, may be living in a more peaceful past, an age of innocence, when they felt insulated from threats common to people, property and places in other parts of the world,” said Mr Mackenzie.

“It is quite possible in many major buildings throughout Australasia and South Asia just to walk off the street and into the heart of areas where only authorised people should be allowed to enter and gather.”

“It has become very clear in Europe and the USA what can happen when a politically disaffected person or a person bearing a workplace grudge decides to take revenge and enters businesses, schools and public spaces.”

“Sadly, this poses a very real risk for people in public and private facilities, and therefore to the facility owners and operators who have a duty of care to protect them. And there is also the major issue of company resources open to sabotage – such as data centres that hold valuable and confidential personal information,” said Mr Mackenzie, who was speaking during a visit to Boon Edam Australia’s Sydney HQ in advance of the Australian Security Expo in Melbourne on July 25-27. 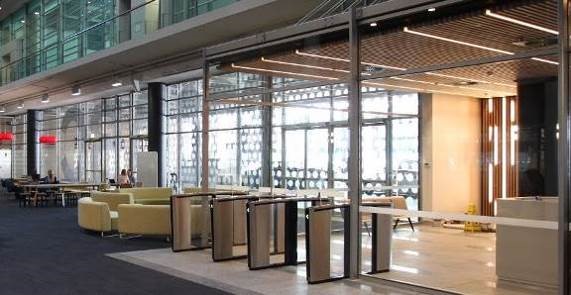 Boon Edam Australia – which offers a full suite of security entrances proven globally – has upgraded the security entrances of major Australian legislative, banking, corporate HQ, media organisation and data facilities in recent years, using technologies that will be on show at the conference and exhibition.

Boon Edam Australia Managing Director Michael Fisher says such public and corporate facilities are unfortunately among the natural targets for disaffected individuals who wish to create maximum havoc to draw attention to their claims and grievances.

“Boon Edam’s entrance security solutions range from Speedgates such as the Lifeline, left, though to high security portals, such as the Circlelock, right.”

“Visitors to and workers in such places can’t live under armed guard 24/7 – quite apart from the horrendous cost, that is not the way we want to live in Australia. But public and private facility managers do have a duty of care to ensure that world-class security entrance access is in place, because the human, financial and insurance implications are vast if they are not. Technologies such as biometric recognition are highly suited to buildings throughout Australasia and the broader Asia-Pacific.”

Some of Boon Edam’s latest Speedgate technologies will be featured at the Melbourne Security Expo, while Boon Edam also markets its Tourlock entry solutions in Australasia that can be equipped with advanced StereoVision 2 ‘time of flight’ camera systems, which create extremely accurate 3D images of the person using a security door to determine whether they are alone and are authorised to enter.

“It isn’t just about safeguarding against terrorism issues since 9/11, although these are part of the bigger security picture we are increasingly dealing with in Australasia and South Asia. There are also huge and growing security issues emerging, including safeguarding of data security, protection of digital information facilities, bank facilities, retail facilities, prevention of theft and of criminal damage.”

“Post 2000, in the digital age, we are increasingly a target because of our increased economic growth, especially in e-commerce. This makes us a bigger target and attracts more attention. It makes sense that those who wish to acquire money by nefarious means tend to target the countries and people with the most money.”

“A further major reason why companies are looking for extra security, is that there is now, more than ever, an increased opportunity for people to do the wrong thing.”

“Technology can be wonderful, but it can also be exploited, and used to the advantage of those that pose security threats. Denying such people physical access to sensitive facilities is integral to security.”

“Boon Edam is on the front line of global change to entry solutions affecting workplaces and public spaces. As the importance of facility entries increases in our region in line with global trends, the demands on managing the passage of people through them is expanding exponentially,” says Mr Fisher.

Boon Edam’s security products focus on entrance security and their needs vary greatly depending on the application. Some examples include: 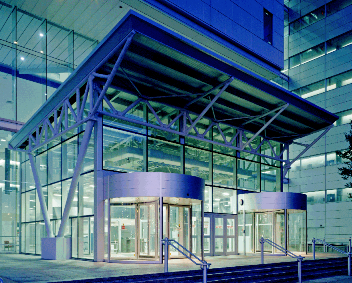 “Office buildings and corporate headquarters are some of many applications where security revolving doors can reduce threats, while blending in effortlessly with surrounding architecture”

Office Buildings. These are mostly about people flow and having a constant awareness of who is inside the building, in case an emergency occurs. These buildings are rarely the targets of larger attacks, but security doors can play an important role in deterring lower level threats such as theft and vandalism.

Data Centres. These have to deal with a constant threat of data theft. Additionally, loss of data due to damage from activists, thieves or other threats, can end up costing in the millions. More advanced levels of security are needed to combat these threats.

Cash Centres. These can handle over $100m every day and need the highest levels of security. Biometrics are an important factor for cash centres, because it means someone can’t gain access by borrowing or stealing a staff member’s access card.

Legislatures, treasuries, embassies and diplomatic posts. These buildings are often hosting international personnel of importance, where additional security is needed. They are also dealing with sensitive data and need to be mindful of threats from this area too.

Tourist hot spots. Landmarks like the Sydney Opera House, for example, deal with millions of tourists and local visitors every year. Security is crucial for the smooth functioning of these sites, that need to make sure only the right people are entering restricted access areas, and that tourists are guided logically around the site with the smoothest flow of traffic possible.

Mr Fisher says future responses to security issues will be many and varied – “This is not a ‘one size fits all’ issue. Every type of building or facility is different in some way, so it’s important to fully assess its security needs before recommending the right technology,” said Mr Fisher, whose major recent projects have ranged from bank HQs to the Australasian headquarters of global resources companies.

“With over 140 years of experience in engineering quality entry solutions, Royal Boon Edam has become expert in creating future-proof entrance solutions that meet the diverse requirements of sustainability, security, and service while also being aesthetically outstanding,” says Mr Fisher.

Family-owned Royal Boon Edam was awarded its Royal appellation from the Dutch Royal House as one of the select businesses that is continually held in high esteem and have shown themselves to be exceptionally faithful to proper ethics in doing business. They must also have a strong balance sheet and be financially stable over a long period of time.

You can find more news about Boon Edam on www.boonedam.com.au/news