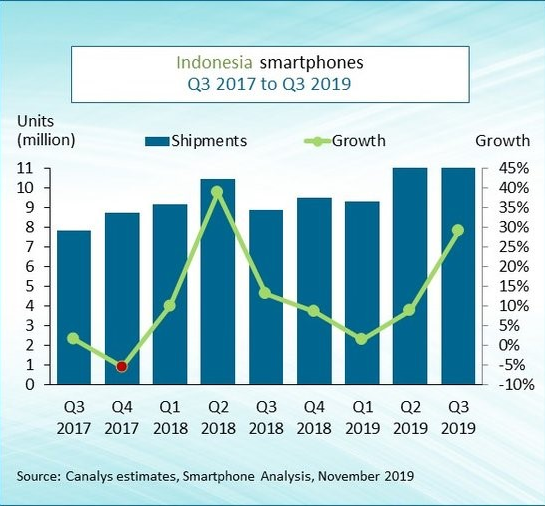 “Chinese vendors are investing heavily in Indonesia,” said Matthew Xie, Canalys Analyst. “Suffering from the intense competition pressure in their home court (see Canalys press release 30 October 2019 Canalys: Huawei grows 66% in China smartphone market at expense of competition), Oppo, Vivo and Xiaomi are eager to make up lost ground through overseas expansion. Indonesia, the world’s fourth largest smartphone market, is still showing a lot of potential, thanks to the country’s vast young population and relatively low smartphone penetration. Stabilization of the Rupiah against the US Dollar in 2019 also strengthens foreign vendor’s investment confidence.”

Oppo topped the market for the second consecutive quarter. The vendor has registered stellar growth in the past three quarters thanks to its low-end products such as A5s and A1K, which contributed 65% of total shipments in Q3. “Indonesia is the second biggest market for Oppo outside China, contributing 8% of its global shipments. To compete in the market against long-term champion Samsung, Oppo aggressively increased investments in its offline channel developments,” said Matthew. “Oppo re-organized and rapidly expanded the size of its local sales team, and increased the number of retail stores to a wider geographical coverage. Besides having comprehensive offline coverage, Oppo’s mid-to-low end portfolio had an aggressive price-to-spec ratio to address local market competition. It gave the vendor a strong short-term boost, but the overreliance on low-end could backfire on their brand image in the mid-to-high end in the future.”

Xiaomi surpassed Samsung for the first time and climbed back to second place in Q3. “Xiaomi is determined to succeed in Indonesia,” commented Matthew. “After it fully completed the process of incorporating locally, Xiaomi has focused on building a local Indonesian ecosystem. In September, at its first MIDC (Xiaomi Developer Conference), which is to attract local developers to its app store, Xiaomi announced it had 24 million active MIUI users in the country. Xiaomi also added six more distributors to cover areas outside Java island. Although it will take time to see the channel expansion effort bear fruit, the increased distribution channels bring a better channel capability, allowing Xiaomi to focus on opening more Mi stores and develop its online channel.”

Realme was the market highlight as it surged to fifth place despite the vendor only entering the market a year ago. “The channel strategy is key to Realme’s fast expansion as it is able to leverage Oppo’s offline network. This has given the young brand a jumpstart and a massive advantage in the complicated distribution landscape. Meanwhile, Realme’s decent price-to-spec ratio is highly competitive even in the online channel. It could grow to be a major threat to Xiaomi and Vivo, as well as Oppo itself.” 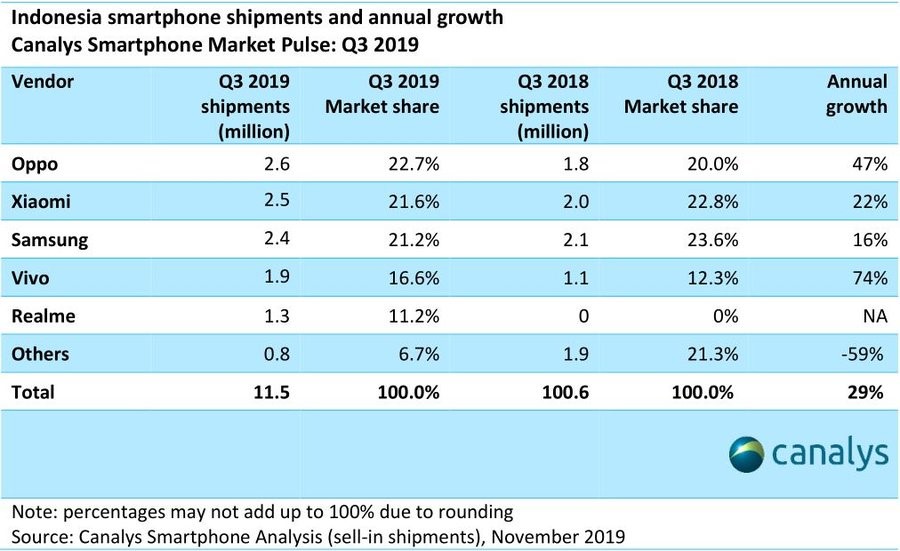 “Indonesia’s smartphone market is poised to deliver continuous strong growth in the next 12 months thanks to major vendors’ marketing push and rapid product refreshment,” said Nicole Peng, VP of Mobility at Canalys. “Significant investments in the market by vendors will continue to improve the retail channel infrastructure and logistics networks, as well as increase local consumer awareness and to flourish the mobile ecosystem. These will, in return, further stimulate smartphone sales and speed up the displacement of feature phones, although it will take a relatively long time. Meanwhile, competition between vendors will be even more fierce especially in the low-end market. Constrained by income level changes and local consumers’ affection for price-to-spec ratio, it is unlikely to change soon.”